ULTRA VIOLENT: How did your obsession with film begin?

JOHN BOROWSKI: My obsession with film began at an early age. My sister had a huge part to play in that because she would excite me about monsters and movies on TV. I couldn't get enough, especially horror films. Before the VCR became a household item, I would search the TV Guide and stay up late to catch the late, late movie, waiting to be scared by Bela Lugosi, or Boris Karloff. Once we purchased a VHS deck, I would rent the vilest and most deranged horror films I could find. The gorier and scarier the better. At an early age, I had an uncanny knack for remembering credits of films, especially directors, cinematographers, and composers. In my teen years, I would practice special makeup and making masks, which is the field I initially wanted to get into. I wanted to make movies, so I found an old 8mm film camera and shot movies in my backyard with my high school friend. These were usually utilizing our latest creature creations such as dummies, masks, and other props. Unfortunately, I was often the star of the films, so if you get a chance to see them now, you'll know why I didn't get into acting! Stabbings, squirting gore, and demons were the key components to these short films.

UV: What are some of your favorite films, and directors you look up to?

JB: Hitchcock had a huge influence on me. Psycho is my all time favorite film. What I enjoy about Hitchcock's films is the underlying psychological impression exerted on the audience. The Art of Alfred Hitchcock, a book by Spoto, exposes much of Hitchcock's subliminal cues throughout his films. Spielberg's storytelling by camera, much like Hitchcock's, also inspired me. George Romero's films were a constant viewing experience growing up. The Dead trilogy, Creepshow, Martin, etc. are all great works. Creepshow made a huge impression on me and is still one of my favorite horror films. I could not get enough of the gore and creative deaths in horror films even though I still enjoyed monster, fantasy, and sci-fi films. Harryhausen was also an idol of mine when I was younger. I enjoy gore films, but not for the sake of gore. Take Goodfellas for example. There is a tremendous amount of gore in that film, but it is necessary to establish what type of violent lives these gangsters were living as well as to create that impact on the audience. So I fell I am more of a suspenseful director with hints of shock and gore when necessary. Atmospheric films like The Exorcist, Alien, and The Thing are also special to me because they create internal fears of terror through their sound and camera work. I also enjoy the works of Cronenberg, Dante, Raimi, Jackson, Fritz Lang, Tod Browning, Noe, Fulci, Argento, Scorsese, Spielberg, Polanski, and Carpenter. The list goes on.

UV: How did you become interested in true crime?

JB: When I was a teenager, I saw the Dahmer murder file because my friend's father was a detective and had left the file on his desk. I grew fascinated by “real” monsters after watching films about fictional monsters. I had only known about Holmes' castle at the time, and really didn't find out more about his entire life until later. The horror of the acts of some serial killers is what interests me. Dahmer's murders and collecting body parts was something straight out of a fictional horror film.

UV: In regards to real monsters, who do you consider to have the most fascinating cases?

JB: The serial killers that fascinate me the most are the ones who have complex psychological components that may have roots in their childhood or daily lives. Holmes, Fish, and Gein are prime examples. They are also the most gruesome. These killers are beyond the realm of intelligent reason. You have to ask yourself, how could these people commit the horrible acts that they committed? We aren't talking about crimes of passion here. How can a man hoist a woman up like a deer and eviscerate her? How can a man stick 29 needles into his groin and live with them for 65 years? How can a man build a building solely to dispose of victims' bodies? I still ask myself these questions because these people fascinate me far beyond a Freddy or Jason. These are people whose actions seem to have some type of larger meaning, whether symbolically or psychologically. One individual who I interviewed about Albert Fish stated that he felt Fish was a dark god, and that there was a reason for his existing, and that people should pay attention to his existence.

UV: Why did you chose to make a documentary on H.H. Holmes?

JB: Ultimately, I chose to create H.H. Holmes in a documentary format because people may no have believed this was a true story if I had made it as a feature narrative film. It is so outrageous! There are some crimes that are difficult to for people to fathom that they actually occurred. Another reason I created the documentary was because I knew it would be a challenge to create a docudrama and keep the audience interested. Many people have a concept of the boring talking head-photo-talking head documentaries. I wanted to prove that documentaries can be entertaining. I was confident in my feature narrative filmmaking skills and wanted to try them out in another medium. I welcome the opportunity to create a feature narrative based on Holmes and his castle of horrors.

UV: How much time did you spend in production?

JB: The final cut took three years to complete. The 5.1 mix and DVD authoring took roughly one year to complete. The reason why it took so long was because I funded the film with whatever funds came along through the years, like credit cards and loans. Another long process was researching and having photo duplications made by stock houses. In the end, I am lucky it took so long, as many discoveries occurred during the making of the film that may not have been found had I rushed through completing it. I am a perfectionist, and I pay attention to detail. So I had to find the props that were from that time period, which also took time. I also had the usual low budget filmmaker problems such as a lighting truck that could not be opened, computer problems, bad distribution offers, etc. When you are a filmmaker making an indie film, the only person that truly believes in the film is yourself. This fact has to be kept in the back of your head to see the film through and succeed. It is easy for other people to come up with negatives when they are not doing it themselves. I am content that Holmes is receiving so many positive reviews, but is it still interesting to see some people not getting the point being that I was the first person ever to bring this story to the screen. The field of indie filmmaking is a tough field that requires nerves of steel and solid commitment and determination. If you are in it for the money, forget it. Indie filmmakers must be passionate about making films, since I have found that one cannot survive on making indie films. H.H. Holmes was created the way I felt it should be told, and that was of the highest quality I could afford. I am content with that.

UV: Do you think movies and books about serial killers can influence people?

JB: That's a tough call. I think there is enough hate and cruelty in the real world everyday to influence people- just open your newspaper or turn on the TV. If someone has a fragile mind to begin with, then there may be external influences that may influence them, but I don't feel we should censor films or cleanse them in any way. I feel this is the exact problem with other serial killer films- they seem afraid to go all the way to make an impact on the audience, to truly make them feel the horror of the murders. In Hitchcock's ten-second shower scene there is more exposure of a murder and a feeling of shock than in some of the new killer or horror films. I really give credit to Gaspar Noe for creating Irreversible, which is a very modern, true horror story. In the graphic depiction of rape, he forces the viewer to confront it in its most degrading form, which demands more of a reaction than just reading it in some newspaper. 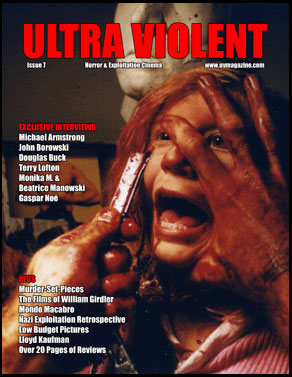 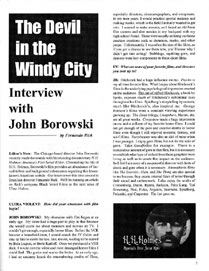